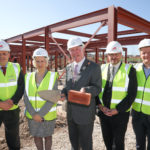 Alpha Living, one of the North of England’s longest-standing specialist housing associations, is on track to deliver its latest assisted living development on Merseyside with the support of a £4.7m finance package from Lloyds Bank Commercial Banking.

The funding, which forms part of the £1.3bn the bank anticipates lending North West businesses in 2020, will see Alpha Living launch the ‘extra care’ housing scheme, named Poppyfields, on the site of a former residential care home in Saughall Massie in October 2020.

The project will see 78 apartments, made up of 60 one-bed and 18 two-bed units, built at the 105,486 sq ft site off Woodpecker Close. The facility will offer 24-hour care and support services on site, with a number of the homes designed to be wheelchair accessible.

Operating in the North of England since 1963, Alpha specialises in services to help people live independently in later life.

“The team at Lloyds Bank has been by our side throughout and, with the support of Homes England and Wirral Council, we’re pleased to say the project is running to schedule. The development is set to become a positive community asset for years to come.”

Steven Atwell, relationship director at Lloyds Bank Commercial Banking, commented: “Alpha Living is widely-recognised by its residents as a force for good in the communities it serves.

“That the organisation continues to deliver such impressive developments is testament to the team’s ambitious yet socially-conscious nature.

“We’re proud to support businesses like Alpha Living as they invest in their future growth. That’s why we have committed £5.5bn of funding to the social housing sector as part of our plan to help Britain prosper.”

0 0 0 0
Previous : Workshops show how to get the best from your heat network
Next : Stonewater is celebrating its fifth birthday since successful merger