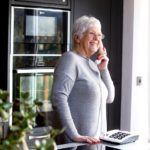 Leading technology company Alertacall is going the extra mile this Christmas to combat feelings of isolation and loneliness amongst its 20,000 older customers, sending cards and making additional calls to those most in need.

With research from The Observer indicating that as many as 1.7 million people are expected to be home alone next week on Christmas Day, double the usual levels as a result of the pandemic, the Alertacall team is providing this additional service at no extra cost to its social housing provider clients. It has reached out to those identified through their highly trained Call Centre as being most at risk of loneliness and isolation.

A study from The Red Cross in the autumn found that as many as 39% of UK adults had not had a meaningful conversation with someone for over a fortnight; as part of its service, Alertacall provides a touchscreen tablet for residents with an OKEachDay button which they can press to confirm everything is OK at their property. Housing providers use the service to improve communication with customers, deliver a better repairs reporting service, and track occupancy.

OKEachDay is based upon the principle that by increasing contact in a way the customer controls, instead of providing a reactive service, it becomes possible to gain a more thorough understanding of changing needs.

In the Christmas card sent to residents the company has included a letter from Dame Esther Rantzen. Dame Esther said: “I would like to take this opportunity also to send you my very warmest wishes in these tough times.

“I’m so glad that their organisation stays in contact with older people when this horrible virus targets us. I know that Christmas can sometimes exacerbate feelings of loneliness, especially when we compare this year with happy memories of the past, and I want you to know there are people to talk to and people who care for you.”

Dame Esther also mentioned the support available from the charity she established — The Silver Line — which is a free, confidential, help and advice and friendship line for older people feeling isolated. The Silver Line can be reached on 0800 4708090.

Ben Lambert, Head of Client Relations for Alertacall, added: “Each year between Christmas and New Year, we telephone our most isolated and vulnerable customers simply to have a chat. Whilst penned as ‘the most wonderful time of the year’, this is not the case for so many people, whose feelings of loneliness are compounded by the festive season.

“The idea of making additional calls over the Christmas period originally came from one of our Contact Centre team members, who felt like it would not only be a great thing to do, but the right thing to do.

“This year more than ever, has given many of us a glimpse into what it means to feel isolated and lonely and the value and importance of human contact — so I’m very pleased we’re continuing this great initiative.”

Alertacall is speaking on ‘Tackling loneliness and Social Isolation for older people’ at the CIH Older Peoples Housing Conference on March 17th.