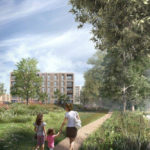 Planning permission was granted for Catalyst’s 50% affordable housing scheme in Oxford by the City Council.

The scheme (artist’s impression above), to be built on land at Armstrong Road in Littlemore, will comprise 270 dwellings, 92 of which will be houses and the rest (178) flats. At least 50% of the homes will be affordable, with 80% of those at social rent with the remaining 20% shared ownership.

Members voted in favour of the development, which will feature high quality design by architects PRP, as well as carefully thought-out landscaping, including open space, children’s play areas and car parking.

Ian McDermott, Chief Executive of Catalyst, said: “This is an exciting scheme that’s been in the pipeline for some time and we can’t wait to start construction. Littlemore Park is going to be a great addition to the area, and we are pleased to be adding to Oxford’s much needed development of affordable housing.”

Ben Williamson, Associate Director of PRP, said: “PRP is delighted that Littlemore Park has been granted planning permission by Oxford City Council. Designed around a rich natural landscape the development will provide much needed affordable housing in the city, whilst creating people-friendly streets and open spaces that will encourage a healthy and sustainable neighbourhood.”

The houses will be spread over two and three floors and have between three and five bedrooms, and the one- and two-bedroom flats will be set out over six apartment blocks of up to four storeys.

Catalyst will improve the public space which approximately 2.581ha of landscaping across the site and make a financial contribution of £50,000 towards general sports and leisure facilities in Littlemore.

In March 2016, the Oxford University Hospitals NHS Trust gained outline planning permission for 270 homes on the site. Catalyst later purchased the site from the NHS Trust and submitted details plans to Oxford City Council in August 2018.

Catalyst is one of the leading housing associations in London and the South East, and following its merger on 1st May with Aldwyck Housing Group now manages over 32,000 rented and shared-ownership homes. For information on the merger, please click here