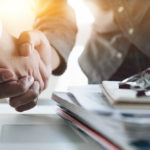 There were 42 mergers between housing associations in 2018, bringing the total number of deals in the last five years to 171 says EMW, the commercial law firm.

Housing associations have been undertaking mergers as a way of cutting their cost base in order to deal with reduced government spending on social housing.

Figures from the National Housing Federation, which represents social landlords and housing associations, shows the Government’s capital commitment towards building homes plummeted from £11.4bn in 2009 to just £5.3bn in 2015

By merging or amalgamating housing associations can remove duplicated back office costs in areas such as IT and HR. These savings can then be reinvested in areas such as property development, refurbishment, maintenance and other frontline services.

As well as delivering housing associations efficiencies through economies of scale, the merger can be used as a catalyst for additional streamlining operations.

As housing associations have increasingly turned to property development over the last two decades, mergers have also proved to be a useful way of building up the skills base and financial power needed to undertake that development.

Examples of housing association mergers in 2018 include:

Lucy Jones, Associate at EMW, says “Mergers can offer a way to cut unnecessary costs and redirect that money to delivering better quality housing. Some housing associations are still subscale and see too much of their money on admin and too little on actual housing.”

0 0 0 0
Previous : Innovation consortium set to modernise how we build homes
Next : Special Report: Groundworks in modular construction
Tweets by LABMmag