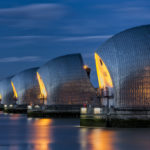 More than 200,000 London homes and businesses are at risk from flash flooding, caused by intense rainfall. The Green Party‘s Zack Polanski pressed the Mayor to ensure Londoners have the right preparation to avoid risks to lives and livelihoods.

The Mayor promised Zack that he would work harder on flood awareness, including making a new map for Londoners to understand their own risks.

Flooding can seriously damage homes, and businesses with flooding even to basement level meaning people have to move out while plumbing systems and fittings are repaired. That doesn’t even include the risk to people’s personal possessions – and nearly half of Londoners, 45 per cent, don’t have contents insurance to help them get back on their feet.

The climate emergency means we face more intense and more frequent heavy rain, that presents risks to London life as we know it. Londoners should be able to assess their own risks and be able to prepare for the worst.

Zack Polanski says: “I was shocked by the scale of the flooding in London this summer. On two days in July we saw heavy clouds stall and deluge homes and business, with water filling basement flats and sweeping into shops on streets. And the same storm systems that hit London also led to fatal floods elsewhere in Europe.

“We have known for decades that London was at risk but the Mayor and Government, along with local councils need to work together so that Londoners can be properly prepared.

“Londoners need to know if and when they should act, the Mayor has said over two hundred thousand homes and businesses are now at serious risk of flooding in heavy rain, but it’s not easy to check your risk. We must make it easy to check the risk, and also communicate clearly what to do when warnings are given.

“We must also heed the warnings on the Climate Emergency, and remember that every tonne of carbon we don’t emit today, is a real reduction in the risk of further floods in the decades to come. We must act now to cut emissions.”

The Cabinet Office has been running trials of a warning system for mobile phones, which will work directly without using apps or needing to register. However, this system will only work when a device is connected to 4G or 5G.