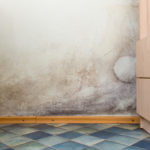 Research carried out across more than 300 local authorities in England and Wales has revealed a 12% tenant complaint rate relating to mould, damp and condensation.

Through the Freedom of Information Act, industry specialist CIT (Consultancy, Investigation, Training) questioned 326 local authorities about the number of properties they were responsible for and the number of complaints they had received between January 2012 and May 2018 relating to the three issues.

Of the local authorities that responded, 57,739 complaints had been received from tenants in the timescale set. The responding authorities were responsible for a total housing stock of 474,923 — a 12.2% complaint rate. Particularly concerning for CIT, which is a specialist in assessing cavity wall insulation (CWI) and external wall insulation (EWI) issues, was one local authority that had installed CWI into 70% of its housing stock and EWI into the remainder and had received complaints equivalent to more than 80% of its properties.

“Although the information we gathered does not directly link issues with moisture ingress to CWI or EWI, it should be something that social housing providers consider,” said Rob McCormack, CIT Director. “We know from our own investigations that CWI failure can lead to a number of moisture ingress-related problems. One tenant stored crockery and utensils in plastic containers because their kitchen was so badly affected by damp and mould. Another example involved a local authority facing a huge bill to address water penetrating outer walls of homes and transmitting to the inner leaf using the cavity fill as a ‘bridge’. In all cases the key to addressing these problems is understanding the underlying cause and dealing with it correctly. However, we asked in our survey how many disrepair claims had been made in the last five years that were the result of CWI or EWI. All respondents answered ‘none’, which is of concern.”

The research also revealed that installation and CWI extractions are on-going across the country, with 16% of respondents installing it and 5.6% removing it. EWI is currently being installed by 20% of survey respondents.

“CWI and EWI, when properly specified and installed, are accepted methods of improving the insulation levels of domestic properties, delivering warm, safe and more energy efficient properties that can help address fuel poverty. However, there is concern that not all installations meet the necessary standards and this can result in the problems highlighted,” added Rob. “Getting it right first time is critical given that failure of the insulation system is more expensive to remediate than it would have been to correctly specify and install in the first instance.”

CIT (Consultancy, Investigation, Training) is a specialist provider of independent, expert technical advice and property investigation services to organisations concerned about the performance of insulation products. It delivers peace of mind about the condition of housing stock and reassurance when properties are being recommended for retrofit intervention works.

0 0 0 0
Previous : G15 Group Pledges a ‘United Front’ with London Boroughs to Turn the Tide on the Housing Crisis
Next : Doors, Windows & Hardware: Ring in the Changes