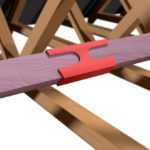 View from the Supply Chain | Speeding up housing delivery

A report has been produced by 16 commissioners including Ed Miliband and Baroness Sayeeda Warsi, which recommends a 20-year construction programme delivering over three million more social houses. Housing charity Shelter revealed figures that show from the Second World War up until 1980, 126,000 social houses were built annually, compared to a mere 6,463 that were built last year. That combined with the current demand for yearly new home developments at between 240,000 and 340,000, it’s fair to say that the construction industry are under immense pressure; especially as this commitment is looking increasingly unachievable.

Although the construction industry boomed post-war, traditional methods have not moved forward at a similar pace. Pitched roofing is a primary example of this; cutting timber on site, building up the roof using rafters, ridge boards, joists, purlins and, of course, the laborious process of nailing wooden roof battens. This was the process when I first started out in the 1960s and remains the same to this day. But we have to think about what’s next — do we stay with these time-served methods or look to new technologies and tools to help deliver the social housing we need?

Look at materials usage to reduce waste
Not surprisingly, Defra revealed that the construction industry was partly responsible for 59% of the UK’s total waste back in 2014. While reducing waste is now a big priority in construction, this is often looked at from a zero-to-landfill perspective not from a significant shift further up the chain in actual volume of materials used. At the moment, roof battens are purchased in bulk with expected wastage from sawing and splitting built in. This leads to a pile of treated waste wood, which then has to be disposed of at the end of the project.

Additionally, and particularly in social housing builds, cost is always a factor. Improving the scope of usability of a roof batten by using a push-fit joint, which allows unrestricted placement of the joint along the rafter, takes wastage to almost zero. Thereby, reducing the number of wooden battens purchased at the start of the build.

New tools for a changing environment
One major reason why the industry faces challenges when it comes to time is site delays; with the obvious culprit being the British weather. From freezing conditions to heat waves, quality of materials and the ability to get the job done can be negatively affected. This shifting environmental field calls for new methods and development of new tools to weatherseal projects faster and to reduce the impact of delays in getting new local authority homes ready for occupants.

Working from height in icy or poor weather conditions crosses the line where health and safety is concerned which means delays are unavoidable. Innovations often come from the need to overcome existing hurdles and finding a way to adapt to changing weather patterns and reducing the timescale for lathing a roof has prompted a real step change in the process. A push-fit roof batten joint made from polypropylene minimises the number of batten cuts, thus eliminating wastage and split batten ends completely. This process can reduce lathing time by three quarters, compared to existing traditional methods.

Pushing boundaries of roof construction
Any shift away from traditional building methods will inevitably be met with resistance. An alternative system will need to prove its ability through thorough testing and certification — from load bearing, to durability to ease of use. Specialist testing facilities like the Advanced Manufacturing Research Centre at the University of Sheffield have recognised the growing need for this service and have an established advanced structural testing centre to provide testing and certification for new and innovative products .

Pitched roof construction has the opportunity to invent, modernise and transform and in doing so push the entire housebuilding process forward — especially in the areas of local authority homes. There is scope to expand the tools we use whilst reducing waste and cost implications onsite, we just need to be brave enough to embrace change.