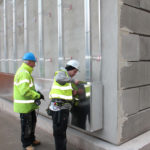 UL | Come up to standards

Gailord Nepp, Head of Building Envelope Testing at UL, offers a guide to meeting the required standards for curtain walling and rainscreen cladding for local authorities and housing associations.

It’s almost a daily occurrence: another news headline on the increasingly erratic weather patterns and climate-related problems affecting people around the globe. The UK has been at the receiving end of some of these headlines, including deadly heatwaves and flash flooding in the summer and prolonged rainfall, high wind speeds and destructive storms during winter.

So how do our buildings stand up against such a battering? In particular, what protections are given to high-rise homes and multi-storey apartment blocks that stand full square against the elements, such as the ones owned and managed by social landlords? A common feature of these developments is high-performance curtain walling and rainscreen cladding. This is not a single building product but an interconnected system of components — typically a bearing wall, layer of insulation and external cladding material. This system works to deliver benefits, such as better thermal insulation, improved aesthetics, reduced weight loading and reduced maintenance.

Rainscreen cladding does what its name suggests: it forms an external barrier, a rear-ventilated cavity that prevents moisture from affecting the main structure and a shield from strong wind force. The air cavity system within the cladding helps reduce condensation and promote stabilised conditions that prevent the formation of cracks and other structural issues. Even at ground level, rainscreen cladding can protect against flooding at the base of the building and prevent that moisture from causing severe structural damage.

It is used for new-builds but also the external refurbishment of existing housing blocks; helping those buildings look and perform like new when used correctly. This sort of refurbishment can make a lot of sense environmentally, by avoiding the waste and carbon cost ofdemolition and rebuilding.

Cladding systems
Understandably, post-Grenfell, even just the word ‘cladding’ can raise concerns among many housing associations and local authorities. But we would be wrong to discard the benefits of these building systems altogether.

When correctly designed, specified, installed, and maintained, cladding systems deliver enhanced comfort and performance, which brings net benefits to the residents and their wellbeing. This is because the façade or exterior envelope of a building is the element that makes the internal space habitable and keeps residents sheltered from the weather.

So how do we rebuild confidence in cladding? What matters most, of course, is its performance in use and how well such systems stand up to the worst that the British weather throws at them. But the best indicator of that is the proper testing and third-party certification process applied to these systems.

NHBC Standards Chapter 6.9 states categorically that curtain walling must ensure “adequate in-service performance.” So, in assessing the suitability of these systems, we need to take into account weather resistance and a multitude of other factors, including acoustic performance, thermal bridging condensation and air infiltration.

Compliance with the NHBC guidance is most usually demonstrated by carrying out a suite of technical tests prescribed by the Centre for Window and Cladding Technology (CWCT) along with the product or system certification. This means testing systems both on and offsite. Air and water testing of the prototype curtain walling system should be carried out according to the CWCT standard test sequence A or B and must pass the test at a pressure of 600 Pa for static air, water and dynamic water testing. The panels tested must be of a similar size and configuration to those that will be used on the building.

In UL’s accredited testing laboratories, we can simulate wind-driven rains, hurricane and tornado winds, as well as hot and cold extreme temperatures to assess and verify building envelope products and systems before, during and after construction. In the UK, much of this testing occurs at UL’s testing facility in Telford.

Once a company achieves certification, they will have access to the project and tender lists to show that its products and procedures have been independently assessed for performance and quality by a third party. Such certification is often part of the criteria for public sector procurement. Certification also highlights their dedication to excellence and performance, which is always a valuable benefit in this competitive market sector.

Recent changes in weather patters that lead to ‘four seasons in a day’ scenarios — although still shocking for most of us — are starting to become the norm, rather than the exception. Coupled with the stern lessons learned form recent fires in highrises, it goes without saying that any manufacturer worth its salt should adhere to the most rigorous testing and certification standards in industry, and social housing clients should be demanding the best.

UL certification allows local authorities and their residents to have confidence in the quality and increased levels of safety for rainscreen and curtain walling products, which leads to clear benefits for all parties involved.