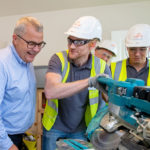 ilke Homes, a leading manufacturer of modular homes, has launched the UK’s first onsite academy to train up the next generation of housebuilders and engineers to manufacture homes in factories, in a bid to ease the current construction skills and housing crisis.

The ilke Academy will hire people from all walks of life, including school-leavers, military veterans, ex-offenders and women. These groups are under-represented in traditional construction and manufacturing.

The ilke Academy will be based next to the ilke Homes factory in Knaresborough, North Yorkshire, which currently has capacity to produce 2,000 homes a year. This will enable new recruits and existing staff to learn a range of vital new skills including engineering, plumbing, manufacturing, carpentry and design.

The academy will also support trainees’ professional growth, with a leadership development course already in place offering new recruits internal progression opportunities and a clear career path in the emerging modular housing industry. The academy will welcome 162 new recruits and further the training of current ilke Homes employees, with applications open to 17-year olds through to those extending their career beyond retirement.

ilke Homes have plans to expand their recruitment drive by establishing apprenticeship and graduate schemes that can support the wider construction and manufacturing industry. Data from the ONS shows that in Yorkshire, for every 15 graduates that leave for London, one heads the other way. ilke Homes hope that by introducing new qualifications, they can reverse the Northern brain drain.

ilke Homes manufacture homes that arrive onsite with fully-fitted kitchens, bedrooms and bathrooms. This process is twice as fast as traditional house building and results in higher quality homes, due to them being manufacturing on a controlled production line with over a hundred quality checks.

Offsite academy
The launch of the ilke Academy — the first ever onsite academy focusing on homes built in a factory — follows similar measures undertaken by the Mayor of London Sadiq Khan, who announced the Mayor’s Construction Academy, focusing on traditional construction, in 2018.

Offsite manufacturing, where homes are manufactured in factories like cars, could play a vital part in helping solve the housing crisis, as recognised by the UK Government. It is hoped that building more homes in a controlled factory environment will encourage a new generation of recruits who may find working on a traditional construction site unappealing.*

Through its academy, ilke Homes wants to train people typically viewed as unskilled or unemployable while also supporting the local economy.

Yorkshire has one of the UK’s highest levels of unemployment; standing at 5% against the UK average of 3.8%. Meanwhile, more than four out of five (83%) of all ex-offenders are unable to find a job one year after release, according to the ONS.

The ilke Homes management team hopes that setting up local networks with a local men’s and a local women’s prison, they can prevent re-offending and promote housebuilding to a new generation of people, while providing stable employment opportunities in an emerging industry.

ilke Homes is also part of The 5% Club, a membership group tackling youth poverty set up by Balfour Beatty boss, Leo Quinn. It hopes to use the academy to help tackle some of the negative perceptions young people have towards construction by showcasing some of the emerging skills and technologies used in modern methods of construction (MMC).

In June, ilke Homes agreed the UK’s largest ever modular housing deal with Places for People for 750 homes. The company is currently working with private housebuilders, housing associations, councils and retirement community developers to supply high quality homes accredited by BOPAS and backed by the NHBC warranty.

Responsibility to help people
Dave Sheridan, Executive Chairman of ilke Homes, said: “We have a responsibility to help people from all backgrounds find employment and for too long, the construction sector has sat on its hands while the skills shortage has hit crisis point. Creating local jobs and helping get more women and young people into the sector have to be priorities. The Government has ambitious targets to build new homes and only through investment in factories will this realistically happen. Investment will only flow if the right skills exist — and that’s why we are keen to collaborate with everyone in the industry.

“Offsite manufacturing gives people a genuine, clear career path together with the opportunity to play a part in disrupting UK housebuilding. Anyone, be they a school-leaver seeking their first full-time job or a reformed offender, should have the chance to be trained — not least when they can help end the housing crisis by building beautiful, high-quality homes.”

Duncan O’Leary, Chief Executive of the New Futures Network, a specialist part of Her Majesty’s Prison Service, said: “This is a fantastic initiative that will benefit ilke Homes, the individuals involved and the families and communities they are part of. Training and work placements in prisons equip offenders with skills they can use to find employment upon release. Having a job helps them get their lives back on track and ultimately keeps the public safe. By offering ex-offenders training relevant to their business, ilke Homes are joining over 300 employers that already benefit from hiring skilled people from prisons.” 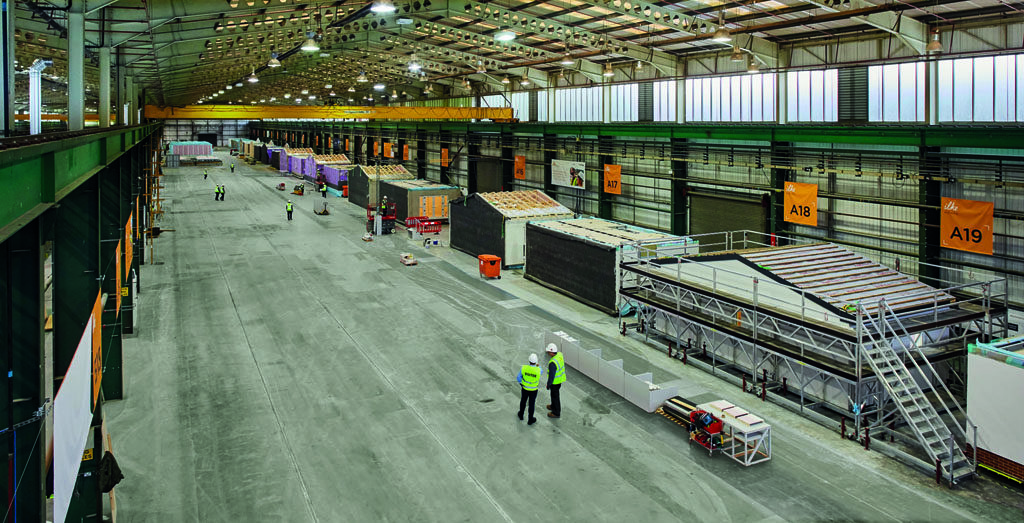 Step in the right
Nigel Adams MP, Member of Parliament for Selby and Ainsty, said: “It’s no secret that the construction industry has struggled to cope with the ongoing skills shortage. The launch of the ilke Academy represents a huge step in the right direction in teaching new skills for local people from all walks of life, creating new and exciting jobs, whilst boosting our local economy.

“I am delighted to see that Yorkshire has established itself as a hotbed of housing innovation. This will be vital as we continue to reverse the brain drain that the capital has swallowed up and ensure that we can attract top talent to the region.”

Mark Farmer, Chief Executive of Cast and author of the landmark Farmer Review, said: “It’s great that ilke Homes and the offsite manufacturing industry are directly employing workers and taking ownership of their training, creating a new generation of career opportunities. These jobs span digital design, supply chain management, manufacturing, on and off site assembly and logistics. This is a crucial opportunity for ilke Homes and other industry leaders in the emerging offsite manufacturing sector to collaborate on their collective common skills needs and to drive forward reformed, widely recognized and future-proofed qualifications that lead to greater industry attraction, higher productivity and a more diverse workforce.”

Gill Cronin, Director of Operations at The 5% Club, said: “The ilke Academy is a very welcome step to establishing a factory-focused workforce to build homes of the future. Ensuring that people are engaged, trained and educated in modern methods of construction is crucial if this nascent industry is to grow quickly. It’s vital that the private sector takes greater responsibility for equipping future employees with the skills and knowledge needed to create the homes of tomorrow.”

ilke Homes employee testimonials
Paul Bailey, Learning and Development Facilitator at ilke Homes, said: “In 1986, at the age of 16, I joined the Army. There were no careers that really appealed to me at that age, and so I felt the Army was the most suitable place to start. Having served for 14 years, the Army taught me a great deal about myself, and gave me skills for life.

“After leaving at the age of 30, I spent a few years doing driving jobs and as an outdoor pursuits instructor, and spent a decade working for the social services.

“Despite the diverse roles I’ve found myself in over the years, I struggled to really see any job as a stable career. But having joined ilke Homes, I can now really see my career begin to takeoff. I relish the challenges that my current role presents, and the fact that we can take people from all walks of life, in most cases completely new to this industry, and teach them to become amazing team members and play their part in manufacturing the houses that people up and down the country need.

“I’m also proud to be part of a company that is tackling the housing crisis in such an innovative way. We have a fantastic culture here, and the dynamic ‘can do’ attitude makes it a great place to work. I have progressed rapidly since joining, becoming a L&D facilitator.

The ilke Academy has taught my so much, in such a short space of time. And having benefited so greatly, I hope I can help the resettlement of former servicemen and many others.”

Steffie Vause, Production Manager at ilke Homes, said: “In my previous role as a team leader at Burberry in the textiles industry, I felt I knew absolutely everything I could know about manufacturing. I could do the role in my sleep, but the culture didn’t suit me, and the lack of progression soon meant that I was no longer as satisfied as I once was. Since joining ilke Homes, I’ve found real satisfaction in my current role, manufacturing homes for people from all walks of life and making a real difference to people’s lives.

“My journey at ilke Homes began in January 2018. I started as a Team Leader, though 18 months on I am now a Production Manager — and I’m happy to say that I’m still learning every day.

“The idea of ‘building’ a house has been broken down into a reliable and exciting process with modular manufacturing, which is why we’ve opened the ilke Academy, letting us give new Team Members the best start and support they can have in this new industry.

“Though most of the team are new to modular manufacturing, there’s a real sense of collaboration as we develop alongside one another. Team members are trained in all the skills they’ll need down the production line so that even if you walk in to ilke Homes on your first day and don’t know what a Combi Drill is, by the end of your first week you will know how to use it safely and to achieve the standard of work required, and the ilke Academy will be instrumental in doing so.

“The ilke Academy will train people not only in the day-to-day skills involved in manufacturing homes, but training every team member to excel to become the company’s next leaders, giving every man and woman a chance to progress.”

*Britain’s construction skills shortage is worsening. Around one-fifth (22%) of the current workforce are over 50 with 15% in their 60s, according to the Farmer Review, while many younger construction workers originate from outside the EU. Meanwhile, the Government has pledged to build 300,000 new homes a year by 2025, requiring an additional 195,000 workers, according to the Construction Industry Training Board. With an ageing workforce, a dwindling pipeline of young talent and the exodus of EU workers, the Government is likely to struggle to meet its ambitious but necessary housing targets.