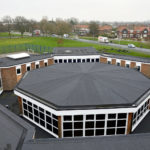 Geometrically-shaped with many facets, the roofs of Thorpepark Academy in Hull now have a guaranteed extra 20 years of life after being fitted with a cost-effective overlay system devised by AHR consultants and BMI.

Built in the 1960s, this primary school consists of two separate hexagonal buildings, each of which has a hexagonal classroom at its centre, used for assemblies, drama and physical education. The roofs were visibly ageing, so the Venn Academy Trust invited BMI and AHR consultants of Huddersfield to survey the roof and apply for Condition Improvement Funds.

As the survey found that the existing roofs were in good enough condition to remain in situ and act as the substrate, the bid was to install an overlay system that included BMI Total Torch Vapour Control, BMI Thermazone Roofboard Insulation, TorchSafe T.A. Underlay and Thermaweld FireSmart Capsheet.

“We have been helping Schools and Academies win funding for over 20 years,” said James Wilkinson, Regional Director, AHR. “We chose BMI because they provided a robust solution to the waterproofing challenges, through their site surveys and initial specifications. They also offer technical support by way of regular site visits and issuing of site reports that ensure the project is installed as per specification. The guarantees underpin the whole process and products provided.”

Watershed Roofing, a long-term associate of both BMI and AHR, was commissioned to carry out the project, as the complexity of the original roof design demanded accurate and skilled installation of the new roofing system.

“There are four hexagonal roofs involved at Thorpepark Academy, so there are no off-the-shelf solutions to this. Each piece of roofing felt was cut by hand to fit these unusual shapes,” commented Mark Atha, Director of Watershed Roofing.

As part of the refurbishment the additional insulation raised the roof height by 130mm, so that the existing glazing units were no longer suitable. Watershed had to remove and replace various glazing panels, including all eight rooflights and two very large — 3m by 2m — Daglaze barrel vaults over the main staircases.

The combination of skilled application and craftsmanship and the installation of the BMI Icopal built-up roofing system will provide a warmer, drier and brighter learning environment for the pupils at Thorpepark Academy for years to come; supported by an independently insured industry-leading guarantee.

0 0 0 0
Previous : Framework-enabled accelerated procurement key to construction bounce back
Next : Heatrae Sadia | The true cost of specification delays in healthcare