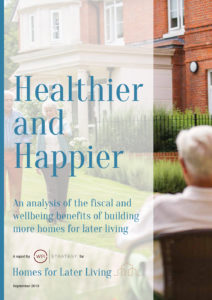 The NHS could be overwhelmed by nearly a million extra older people suffering from falls related injuries, as new research reveals a link between good quality housing and physical and mental health outcomes for older people.

The findings are part of a major research project by WPI Strategy for Homes for Later Living, a new consortium of housing providers who specialise in homes designed for older people.

The report, authored by former Treasury economist Chris Walker, says that as Brits are living longer, the number of people aged 80 or over who will suffer from falls is expected to rise from 1.6 million today to around 2.5 million in 2032, a rise of 900,000. In line with this increase, by 2032 the total cost to the NHS of falls amongst the elderly will rise to £2bn a year.

The report says more needs to be done to focus on the link between poor health and the quality of housing available to people in later life. It highlights a severe shortage of housing being built specifically for the growing numbers of retirees.

The result is that many older people are often living alone in mainstream housing that is unsafe, unsuitable and unhealthy, and this is where they are most likely to suffer from falls, social isolation and dementia.

Key findings include:
• Each person living in housing specifically designed for later life designed for later enjoys a reduced risk of health challenges, contributing to fiscal savings to the NHS and social care services of c. £3,500 per year.
• Those in specialist housing are half as likely to have falls with resulting fractures, injuries and costly inpatient bed stays.
• Building 30,000 more retirement housing dwellings every year for the next 10 years, which is the estimated demand, would generate fiscal savings across the NHS and social services of £2.1bn annually
• Based on a selection of established national well-being criteria such as happiness and life satisfaction, an average person aged 80 feels as good as someone 10 years younger after moving from mainstream housing to housing specially designed for later living. 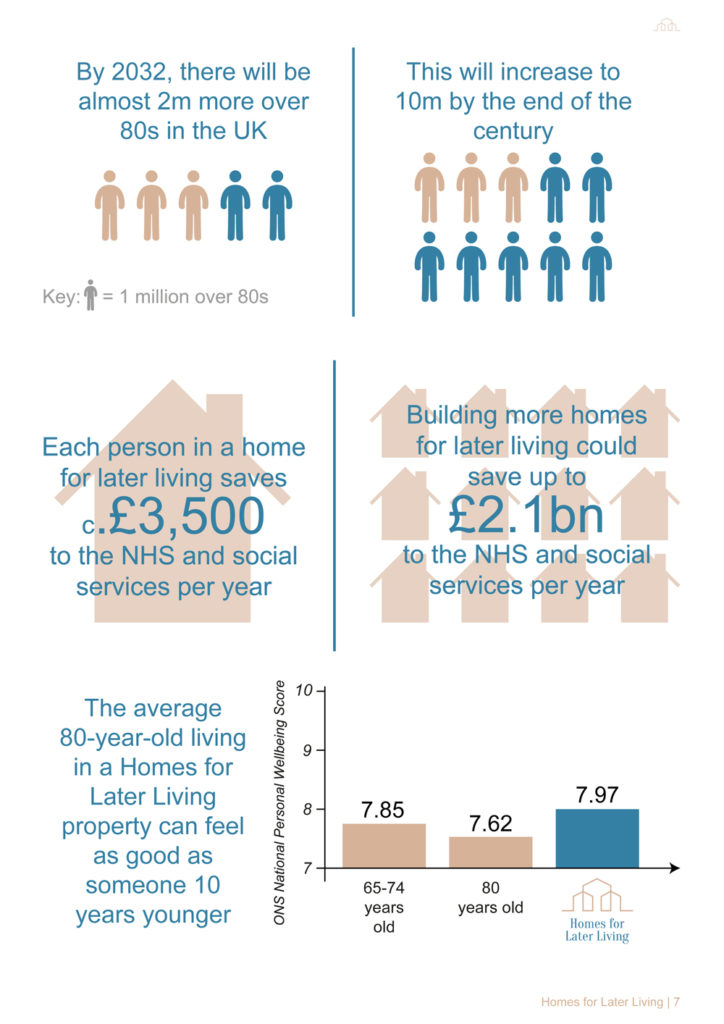 John Slaughter, Homes for Later Living, says: “There is currently a severe shortage of suitable housing for the growing numbers of people in retirement. The consequences are severe, both to the NHS, which will be under increased financial pressure from falls related injuries, and to individuals who are often living alone in mainstream housing that is unsafe, unsuitable and unhealthy. This is where they are most likely to suffer from physical and mental health problems.”

Rachael Maskell MP, Chair of the All Party Parliamentary Group for Ageing and Older People comments: “As people in the UK get older, there is currently a severe shortage of housing being built specifically for those in later life. The result is that many older people are often living alone in substandard accommodation, where they are more likely to suffer from falls, loneliness and dementia.

“This is why we urgently need more specialist retirement housing. Building more homes across all tenures for later living every year would give people more choice and flexibility on how they live their lives.”

Councils need greater planning powers
Responding to a report by Homes for Later Living, which claims poor housing is set to contribute to almost one million more older people suffering falls-related injuries, the Local Government Association’s Housing spokesman, Cllr David Renard, says: “Councils are working hard to meet the housing needs of older people, including working with developers to offer suitably designed and affordable specialist housing. Councils need to be given greater planning powers and resources to hold developers to account, ensuring they build the right homes in the right places with the required infrastructure needed by different groups within local communities.

“But it is crucial to acknowledge that the majority of older people will live in existing housing. The Government needs to continue to invest in supporting the adaptation of homes to meet the needs of people as their circumstances change, keep older people safe and independent in their homes and prevent avoidable admissions to hospital and care homes.

“However, for councils to be able to do more, the Disabled Facilities Grant needs to be fully funded to keep pace with future demand and be easier for people to access.”

Good quality housing critical
Cllr Tom Beattie, District Councils’ Network Spokesperson for Better Lives, said: “Good quality housing is absolutely critical to supporting everybody’s health and wellbeing, and district councils are committed to making sure people are safe and well at home. However existing housing stock is not suitable for meeting the needs of people as they get older, increasing the risk of falls in the home.

“This is why the Government needs to increase the size of the Disabled Facilities Grant so districts have the funding to provide the home adaptations older people need and rely on.

“With more than 70% of future households including someone over the age of 65, it is really important that we build more homes which support people to age well, by giving districts more powers to build the homes our communities need.”