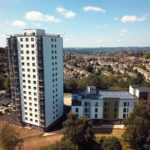 LABM revisits the project to rejuvenate two ageing tower blocks in the Sherwood area of Nottinghamshire and build a new much needed extra care facility onsite. Nottingham City Homes and Nottingham City Council’s aim was to create a retirement village.

In 2017, work began on an ambitious project to completely refurbish two 1960s 15-storey tower blocks on Chestnut Walk in Sherwood, Nottinghamshire. Owned by Nottingham City Council and managed by Nottingham City Homes, Winchester and Woodthorpe Courts contain 90 flats each for residents aged 55 and over. The flats back onto picturesque parkland and residents living in the upper floors enjoy expansive views across the city.

The tower blocks had begun to look rundown and were in definite need of some TLC. Nottingham City Homes and the City Council were keen to improve the aesthetics and energy performance of both buildings. Last year LABM visited the site as the blocks were being reclad and Windoor balcony systems installed, to find out more about the scheme. Luke Johnson, Project Manager for Nottingham City Homes told LABM: “The project was originally to renovate these two towers like we have with some of the other blocks NCH has in Nottingham — new insulation, reclad them and make them more energy-efficient.”

The refurbishment of Winchester and Woodthorpe Courts is part of the City Council’s Building a Better Nottingham programme. Improvement works to the blocks included the installation of external wall rendering and insulation, new windows and the Windoor balcony system, as well as upgrades to the heating systems. Sprinkler systems have also been fitted in all the apartments and communal areas.

Following the devastating Grenfell tragedy, understandably, concern was rife amongst residents living in high-rise across the UK regarding the safety of their own accommodation blocks. NCH was keen to allay resident’s fears and ensure the blocks were well protected, and the day after Grenfell were onsite talking to residents. Sprinkler systems have also been been fitted in all the apartments and communal areas.

Community spirit
Previously a community centre occupied the space between the two tower blocks, not too dissimilar in appearance to the temporary portable accommodation that was stationed opposite the flats and used as a day centre for residents during the refurbishment process. The community centre brought residents together and acted as the hub of the scheme.

As part of the project the original centre was demolished to make way for a new extra care facility comprising 44 individual units. Luke told LABM: “Originally we were going to build a new community centre. However, what NCH decided to do instead was put a new-build extra care facility in the middle, which is something that Nottingham doesn’t have many of.”

Nottingham City Homes’ and the Council’s ambition was to create a new retirement village — Winwood Heights — containing 224 one- and two-bedroom flats, with all the new-build accommodation in the development fully disability accessible.

Cllr Jane Urquhart, Portfolio Holder for Planning and Housing at Nottingham City Council, says: “We have an ageing population, and it’s important that when we’re transforming our neighbourhoods, we ensure the homes we are creating meet the needs of local people.”

Many of the existing residents have lived in the tower blocks for 20 years or more and have forged strong bonds and feel a real sense of belonging, community. The new extra care facility will act as a next step accommodation for residents when they require greater assistance in the home, allowing them to continue living onsite surrounded by their friends. The new building connects to the existing tower blocks via two weatherproof corridors and features a laundry room, IT room, a kitchen, carers’ room and assisted bathroom. There is also care provider accommodation, as well as a sky lounge and roof.

Minimising disruption
Willmott Dixon was the main contractor on the scheme. One of the major challenges for the development partners was the fact that the project necessitated carrying work out in a live environment, with residents remaining in-situ throughout. To minimise disruption, the partners agreed that work would not start onsite until after 8am and always finish by 5pm during the week. No work was carried out at weekends, affording the residents some respite. To achieve success on a project like this, resident engagement is crucial.

Nottingham City Homes actively engaged residents throughout the planning process. The social housing provider held events to outline the proposals and gauge opinion. The events provided an opportunity for residents to raise concerns and ask any questions they might have about the proposed scheme.

Resident engagement
Winchester and Woodthorpe Courts benefit from an active and vibrant tenant and residents association (TRA), led by Chair, Jenny Thirtle-Denman. The reaction amongst residents to the proposed plans was overwhelmingly positive. During the consultation phase, Jenny commented: “The great majority of residents here have welcomed the plans for renovation. It is already a great place to live and when the proposed plans are completed our homes will be even more attractive.

“Due to the ageing population, extra care accommodation is urgently needed, so the proposed new scheme will no doubt instil confidence in the future lives of many of the residents here.”

Residents were regularly consulted and involved in the final plans, which, Jenny adds, “has been appreciated by everyone.” This illustrates the importance of effective and transparent consultation for engendering goodwill amongst residents. If residents can clearly see the benefits, they are likely to put up with any unavoidable disruption.

NCH had to work with residents to gain access to the flats to allow the contractors to carry out the heating and insulation works. Luke comments: “We have a very good tenant liaison team on the job and surprisingly have had no issues with access.

Due to the age of the residents, carers and nurses are frequent visitors to Winchester and Woodthorpe Courts and this had to be factored in. Luke continues: “Willmott Dixon has been very good working around people’s needs and requirements. It’s been a very positive experience working with the residents, which is one of the biggest risks on a development like this.”

Enclosed outside space
Another aspect of the project where good resident engagement paid dividends was the decision to get rid of the traditional balconies with railings and install enclosed balcony systems instead. Nottingham City Homes wanted to create additional space and bring more light into the apartments, whilst still enabling residents to enjoy the fabulous views.

There are several advantages to installing enclosed balconies, sometimes referred to as sunspaces or winter gardens, such as the benefits of solar gain, they increase the amount of natural light into a property, boost natural ventilation and can help reduce a building’s energy requirements. They can also be enjoyed all year round and crucially provide a private and secure outdoor space for residents. On this project, residents initially expressed trepidation about the enclosed balcony system, however following consultation and after Windoor sent a sample to site for the residents to take a look at, the nervousness dissipated. The residents were impressed.

Building transformation
Now the project is complete, the two tower blocks have been completely rejuvenated inside and out. Not only do they look more visually appealing, but they should perform substantially better too, providing an improved living environment which ultimately will help reduce resident’s energy bills. The creation of a new extra care facility onsite is an excellent addition for the residents and also a great benefit to the wider area, given the need that currently exists. The project highlights a real commitment from Nottingham City Homes and Nottingham City Council to delivering solutions to that meet the evolving needs of their communities.

Nick Murphy, Chief Executive of Nottingham City Homes sums the project up aptly when he says: “The Building a Better Nottingham programme is transforming people’s lives across the city. We are improving the look and feel of our estates, as well as building energy-efficient, sustainable homes, which can dramatically reduce fuel bills for our residents. The transformation of the tower blocks in Sherwood will offer huge benefits to our existing tenants and to many older residents in the future, thanks to the construction of the extra care apartments and facilities. It will offer flexible care and support to enable older residents to continue to live independently.”

0 0 0 0
Previous : Affordable housing on the way for Grendon, North Warwickshire
Next : Construction sector urged to be vigilant over radon risk