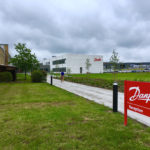 In the Spotlight | Danfoss

LABM visits the Danfoss Silkeborg and Nordborg facilities in Denmark to find out about the company’s origins in bellows technology and how its products are helping to transform the energy performance of buildings.

Danfoss began life as Dansk Køleautomatik og Apparatfabrik in 1933, the brainchild of Mads Clausen. Mads’ parents owned and worked a farm in Elsmark in the Nordborg municipality of Denmark. As the second son, his destiny was not to takeover the family farm when his parents retired, but to ply an alternative trade.

Fortunately for Mads, he naturally inclined more towards engineering and in 1929 got a job with Brdr. Gram, a Danish company that produced cutting-edge refrigerators. It was this job that was to inspire Mads to set up on his own producing thermostatic valves, initially operating out of his old bedroom at his parent’s farmhouse in Nordborg whilst the business found its feet.

Jørgen M. Clausen, Mads’ son and current Chairman of Danfoss’ Board of Directors recalls: “Brdr. Gram got their valves from the USA from five different manufacturers, one of which was Sporlan, which is still in business today. My father took the valves home with him after work and dissembled them in the evening. He dreamt of making his own valve with the best from each of the others. Together with friends in Sønderborg, they had the different parts produced and assembled so they could send a sample to refrigerator manufacturer, Atlas, in Copenhagen. My father invited Hans Gram to establish a partnership with him, but nothing came of this. So he began by himself, and this was the beginning of the long journey towards Danfoss’ bellow production.”

The first of Dansk Køleautomatik og Apparatfabrik’s innovations included water valves, thermostats, pressure switches and filter driers. Mad’s quest to produce bellows began in the 1930s, however it was the 1950s before his dream of manufacturing bellows at scale would become a reality.

According to a book produced by Danfoss to mark the history of the bellow: ‘In 1942, having accumulated the required knowledge, they were ready to begin their own bellows production on the very same day that England bombed the German factory [one of the three major producers in Europe], which had been supplying bellows up to that point. This breakthrough lent a helping hand to all Scanindavian refrigeration companies, making it possible for them to keep production running until the end of the war.

‘But, it proved difficult to extrude the tubes to become sufficiently thin, and to shape the convolutions without the risk of the tubes breaking. The outcome of the hunt for the perfect method, which began in the 1930s, did not emerge until 1958 when the mass production of bellows began.’

The product is still in use today and apart from a few refinements, is largely unchanged.

Engineering Tomorrow
In 1939 Danfoss employed 26 people, now the company employs well in excess of 30,000 people, has two facilities in Denmark (in Silkeborg and Nordborg), as well 27 factories in 11 countries across the world and is a multi-national global concern. The company’s tagline is ‘Engineering Tomorrow’, an ethos that reflects the company’s origins and founder Mad’s pioneering spirit.

Denmark fully embraces sustainability — 64% of all buildings in the country are heated by district heating. Many people might be surprised to know that Denmark imports significant amounts of waste from countries like the UK to incinerate and use as heat to power plants.

Danfoss is at the forefront of technology to improve how buildings consume and use energy. Identifying and taking into consideration global trends such as digitalisation, urbanisation and climate change, Danfoss invests 4% of its annual sales into research and development. By 2030 the company aims to reduce its energy intensity by 50% compared to 2007 figures. Since 2007 the company has cut its energy consumption by 43% and reduced CO2 emissions by 27%.

In 2005 Jørgen Clausen and his wife Anette realised one of their dreams by founding The Universe Science Park, a theme park designed to inspire and encourage children and young people to take an interest in science and technology. The park occupies the site of Mads Clausen’s parents’ farm, which still stands today and remains largely unchanged to how it was when Mads lived in the property — in terms of decoration, furniture and period features — except for a few modern additions which help visually tell the story of Danfoss.

“The first prototype of the world’s first radiator thermostat was tested in my father’s office. It was the birth of the world’s first thermostatic valve for controlling the temperature in a room. The actual marketing began in 1952, when the radiator thermostat was launched as a device that saves money and makes centrally heated rooms more comfortable, and from there on it just took off” recounts Jørgen Mads Clausen, Chairman of the Board at Danfoss.

That radiator thermostat turned 75 this year. The latest incarnation is the intelligent Danfoss Eco — which has already won prestigious Ret Dot and Danish Design Awards.

According to a report from the European Building Automation Controls Association, in Europe there over 500 million radiators with manual and unregulated valves. If radiator thermostats were installed on all of them, two billion Euros and 130TWh of energy could be saved every year, reducing Europe’s annual CO2 emissions by 29 billion tonnes.

Intelligent technology
In 2019 Danfoss took the decision to streamline its high efficiency range of Time controls for domestic heating and hot water systems to provide a simpler choice for contractors, without compromising on end-user benefits. The TS710 and FP720 for example, which replace all existing Danfoss timers, are easy to programme for either 24hr, weekday/weekend (5/2) or seven-day periods. They feature an intuitive user interface, with simple controls and a large backlit display. In addition, the Timers incorporate a service interval timer, which can be activated by the installer as a gas safety feature for social landlords.

The company has also released a new look TP5001 programmable room thermostat, which replaces existing TP7000 and TP9000 models. In accordance with Boiler Plus regulations, the microprocessorbased programmable room thermostat includes on/off load compensation control for increased comfort and improved economy over standard On/Off control, although this can be selected if required.

Installer hub
The latest innovation from Danfoss is the Installer Hub, which goes live in September. This new online resource is designed to make choosing and fitting one of the company’s domestic heating controls as straight forward as possible for heating contractors. As well as offering a comprehensive online product resource and a repository of useful information, there are plans to include a forum facility in the future. The site can be accessed here.

Gareth Ash, Danfoss Marketing and Technical Support Manager, describes the site as an “online encyclopaedia of all things Danfoss,” saying: “With just a few clicks, contractors can find the latest product data sheets, online training and links to our helpful ‘How To’ videos on YouTube.”