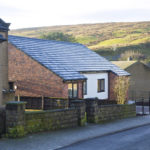 “Not that long ago we used to have CB radios in the vans, because there was no phone coverage at all up here,” says Dave Seal, Maintenance Supervisor at believe housing, which operates across around 862 square miles in County Durham. “Even now there are one or two of our villages where the lads out on repairs will have to get in their van and drive for several miles to make a phone call back to the office.”

This is probably the most remote social housing in England and it’s looked after by the team at believe housing, based in Bishop Auckland.

“It’s an area where employment is dominated by agriculture and tourism nowadays,” says Director of Neighbourhood and Customer Services at believe housing, Ian Porter. “Social housing is just as important here as it is in big cities, but it’s all too often forgotten on the national stage.

“We’re the only substantial provider of affordable homes in the area and we do take the responsibility it brings very seriously. We’re determined to provide the same access to our services that any other area receives. Neighbourhood teams are out and about regularly and even the most remote areas still get estate inspections to the same level as communities in the middle of Durham.”

Far flung places
The Bishop Auckland office is in the west of the county, but even that is a 50-mile round trip from some of the properties the team look after. Even on a good day it can easily be a two-hour drive as there’s only one main road in and out of Weardale. That’s more like a 100-mile round trip from the head office in Seaham and it’s sometimes easy to forget the distances involved says Dave, whose patch covers around 200 square miles alone. “I’ve had one or two phone calls where someone has said ‘can you not just pop round’ simply because they haven’t grasped how far away the home we’re talking about actually is.”

The award for the furthest flung homes looked after by believe housing is a tightly fought competition between the villages of Wearhead and Rookhope. Wearhead, which has a population of 210, is bang in the middle of the North Pennines area of outstanding natural beauty. But it does have the advantage of being on the main road through Weardale, even if it’s almost as close to Penrith in the Lake District as Bishop Auckland. believe housing has four properties in the village, and another dozen in nearby St Johns Chapel.

Rookhope is certainly more off the beaten track and about 320m above sea level. The village has one pub, one primary school, a village hall, one social club and a population of under 270. According to Dave the club operates on the honesty box principle for members and is only staffed during events. There is however one bus service, which runs an impressive four times a day during school term time.

There are around 20 believe housing homes in the village, a figure bolstered by a pair of new bungalows completed as part of the housing association’s current new-build programme. The new bungalows were the first social housing to be built in Rookhope for more than 50 years. The village was pretty much at the top of the list when the construction programme was being drawn up as a result of much work with local councillors and residents.

believe housing is also heavily involved in supporting community groups in Weardale. Funding to set up a food bank for the area, which delivers to the door of those in need as well as offering collections, came from the organisation. Local sports clubs, village halls and schools have benefited from support. Even Christmas lights in some villages along the dales have been made possible by community funding from believe housing.

The remoteness does not just bring problems associated with travel. Believe housing carries out its own repairs and maintenance in the area and, with the best will in the world, it’s not always possible to have everything you might need for a repair on the van.

“Sometimes we’ll send a joiner out to fix a door, and when he gets there he might discover that it needs a new handle. There aren’t many door handle stockists in Wearhead, so he’ll have to jump back in the van and go to get one from stores. It’s really easy to lose two hours to deal with that and then there’s the knock-on effect for scheduling. It’s a long way to go for a door handle.”

Remote access
The scheduling of repairs in such a rural area is a minefield. It requires real knowledge of the area to create a robust plan of work. It’s not like dealing with high numbers of identical properties, there might only be 20 homes to think about in Rookhope, but there are several different house types; ranging from two-year old bungalows to 100-year old plus terraces. And you can forget about mains gas in many of these villages, solid fuel is still king in the upper-dales. Maintaining different skills and competencies for a relatively small number of properties is essential. For people who have worked in the area for as long as Dave though, the idiosyncrasies of each home are etched into the mind.

Of course, you can magnify any problem by 10 in the winter. Weardale is normally one of the first places in England to see snow during winter, and we’re not talking about the kind of snow that brings the South-east to a halt; we’re talking proper drifts. It’s not unusual for Rookhope to be cut off completely by snow and villages on the main roads to be severely hampered too. But if a heating system fails, the team from believe housing have to get through as quickly as possible.

Speak to anyone who has been in the team for a little while and they’ll tell you of the extremes they’ve faced to get through and the hours spent shovelling snow. It helps to have people in the team who live locally; who were brought up in these conditions and know the area like the back of their hand. It also means that they are close by should a problem occur. On a recent trip to Wearhead, Dave was regaled by one tenant who had offered to give colleagues from the county council a place to sleep overnight such was the severity of the weather they had come in to when visiting her.

Rapport with residents
But enough of the challenges, what about the pleasures of working in one of the most beautiful parts of the country?

“You do get to know the tenants. We might cover a vast area, but there’s not as many houses as elsewhere in the company,” Dave says.

Most people in Weardale tend to stay in the area too, so the valley has some very long-term tenants. Like the lady who greeted Dave as he checked up on some work on a tiny cul-de-sac in Wearhead. Her nephew actually works for believe housing too, so there was a lengthy discussion about his new-found love of photography and his favourite spots in Weardale. The rapport with customers is as genuine as the community spirit is.
It’s a role in Weardale society that believe housing has no intention of backing away from.

“The need for genuinely affordable housing in an area like this is never going to be met by the private sector and it’s certainly not diminishing. This is where housing associations really come into their own,” says Chief Executive of believe housing, Bill Fullen.

“The national discourse is all too often focused on the raw numbers. Two new houses sounds like a tiny number, but in some of the communities we serve that could easily be a 10% or even 20% increase in the number of affordable homes. We have to keep our eyes on what is right for each community in the long-term and not go chasing numbers. This is an amazing, rich landscape that needs sensitive development across all tenures,” Bill adds.

The scenery of the area is without doubt one of the best bits about working in such a remote location. Dave loves driving through the dale on a sunny day, and as the lush green horizon passes slowly by, alongside the occasional sheep, who can blame him. As he winds his way up a single-track road in the van, he gets a bird’s eye view of the entire valley, and the houses dotted all around. “It’s much nicer than being stuck in the office,” Dave says. “And sometimes it’s quite nice that the phone doesn’t ring when you’re up here.”