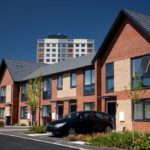 Halliday Clark Architects on their affordable housing scheme ‘The Walks’

Affordable housing scheme ‘The Walks’ breathes new life into Flint and connects the town to its past, present and future, as Halliday Clark Architects tells LABM.

In 2011, Flintshire County Council in North Wales commissioned a DTZ-led consortium to develop a regeneration masterplan for the development of Flint town centre, creating a once in a generation opportunity to re-plan this key town centre site. The resulting masterplan proposed a range of detailed action plans to strengthen the identity and image of the town, improve connectivity and bring a better housing offer into the heart of Flint.

In addition, the Flintshire Strategic Housing and Regeneration Programme (SHARP) had identified a rising demand for affordable and social housing and is currently overseeing the delivery of over 500 new homes across the region by 2021. Of the 500 homes, 197 are affordable rent; owned and managed by North East Wales Homes and Property Management Ltd (NEW Homes), the first Council-owned housing company in Wales. These homes are targeted towards the ‘squeezed middle’ — those households that cannot afford open market rent level; but earn too much to be considered for social rent properties. The remaining 303 are social housing managed by Flintshire County Council.

Yorkshire-based architects, Halliday Clark, were commissioned for all RIBA Stages 0-7 by the joint venture partner Wates Construction in conjunction with Flintshire County Council to deliver The Walks; the first phase of homes as part of the SHARP programme. The scheme features 92 high quality properties including two and three bed houses and one and two bed apartments. 62 of the homes are for affordable rent and 30 properties are social rent homes. 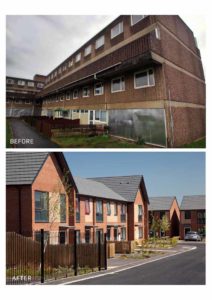 Comments David Halliday, director at Halliday Clark: “One of the key design drivers for this scheme was reinforcing the link between the historic Flint Castle and the town centre’s commercial and retail facilities. The town of Flint started life as a ‘planned town’ in the 13th Century, originally built to serve Flint Castle built by Edward I in 1277 as part of his ‘Ring of Iron’. The town was set out to the south of the castle in a grid, based around a central cruciform of streets linking to the castle gates and the coastal routes from Chester along the North Wales coast. In the 1840s, the development of the railway severed the town from the castle.

“The development of maisonette blocks and towers in the 1960s removed most of the original historic fabric and traditional ‘street’ layout, leading to a series of isolated communities with no sense of connection to the town centre. Very few new homes had since been built in Flint, and the maisonettes and tower blocks were tired and no longer fit for purpose. Our approach was to respect and enhance the existing urban environment and reconnect the site to its surrounding area, re-establishing its original identity as an ancient fortified town.” 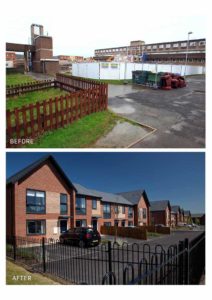 Overcoming challenges
The main challenge faced with this project was the build programme. During the large-scale excavation of the former maisonettes, a section of a 13th Century ditch and dyke believed to have been created to protect workers who built the castle in Flint, was uncovered. A six-month archaeological dig had to be carried out by Archaeology Wales to recover the remains before construction could begin. Despite causing significant delays to development, this discovery was further proof of the cultural and historical significance of Flint on both a local and national scale.

A second challenge was to ensure the community felt involved and engaged at every stage of planning and construction. Halliday Clark undertook valuable and extensive community consultation during the pre-planning application as well as through the build programme, to allow residents to raise any concerns they had which allowed for a smooth transition into the town. Throughout the project, the local Church was used every Friday as a ‘drop in’ for residents and it has now become a central point for community activities which has helped to improve community cohesion.

The 92 homes were completed in May 2018 and are now fully occupied. For the first time, the housing site has been integrated into the town centre through a wide boulevard called ‘The Walk’, which has helped overcome the physical and perceived negative barriers that existed previously between the town centre and the site. 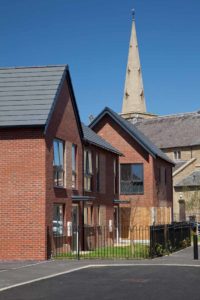 Flintshire House Standard
Every property has been built to the Council’s Flintshire House Standard. This provides homes of excellent quality with high levels of thermal efficiency and large space standards which offer an attractive, high quality, sustainable home. A ‘fabric first’ approach was adopted to achieve the required levels of energy efficiency, including a ‘waste water heat recovery unit’ which converts 60% of the potential energy in the waste water back into heat for the incoming water. Whole life costings were reviewed and taken into consideration to reflect criteria within the Flintshire Housing Standard and provide high-quality fixtures and fittings throughout the homes.

The aesthetic of the homes reflects the mid-19th Century Welsh vernacular housing design which featured simple forms with contrasting brick banding some featuring polychromatic brickwork. The overall brick colour of these houses is a deep orange/red with yellow brick features — irrespective of whether they are affordable or social housing, creating a cohesive mixed-tenure community. The Council was also keen that the new properties were flexible to meet the future needs of ageing residents. Elements of this ‘futureproof’ approach to the design include a 1m wide staircase with fused spur to accommodate a potential stair lift and first floor bathrooms adapted with a level access shower. 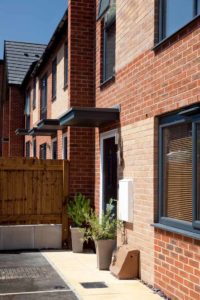 Regeneration example
Adds David Halliday: “The scheme is a fantastic example of how the regeneration of rundown brownfield sites on the edge of urban centres are an economically viable way of constructing high-volume affordable homes close to people’s workplaces and key amenities. Not only does the scheme provide quality, energy-efficient, affordable homes, but ample landscaping and the provision of substantial amenity space, including a play area at the south-western corner of the scheme, offer places where residents and their children can meet and spend time, further helping to create a sense of community.”

In 2018, The Walks made the national shortlist as one of eight of the ‘Best housing schemes over 50 units’ at the Awards for Planning Excellence hosted by the Royal Town Planning Institute. The scheme won 2019’s ‘Best Social Housing Development’ at the North Wales LABC Building Excellence Awards and will compete in the UK final in London in November 2019. The scheme was also been highly commended in the CLAW Project of the Year Awards (Consortium of Local Authorities in Wales).

Halliday Clark is continuing to work with Wates Construction and Flintshire County Council on subsequent phases of the SHARP programme. A number of homes have already been completed and occupied by residents and a further 200 properties are currently being worked on at planning, building regulation, tender and construction stage.

With thanks to Halliday Clark Architects for preparing this article