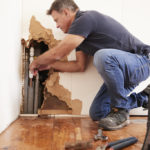 As 2018 drew to a close, the Homes (Fitness for Human Habitation) Act 2018 received Royal Assent. It came into full force on the 20th March 2019. Liam Hale explains what social housing providers need to know.

Fitness for habitation is increasingly high on the agenda of social housing providers as the numbers of repair claims continue to rise. This rise in repair claims is not necessarily the result of poor housing, but due to an increased awareness of the ability to claim, driven in part by very targeted and aggressive advertising and social media campaigns by law firms and claims companies.
The new Homes (Fitness for Human Habitation) Act is likely to see claim activity increase further.

So what does fitness for habitation really mean?
The law on habitation has been very clear for over 30 years. The Landlord and Tenant Act 1985 deems a property unfit if it is defective in one or more the following ways:
• Repair
• Stability
• Damp
• Internal arrangement
• Natural lighting
• Ventilation
• Water supply
• Drainage and sanitary conveniences; and/or
• Facilities for preparation and cooking of food and for the disposal of waste water.

There are some things that a landlord cannot be held responsible for. These include when the issue is a result of a tenant’s behaviour, accidental damage such as flood or storm damage, where third party consent is needed but not given, or if works need permission such as planning.

Repair policies
Under the new Homes (Fitness for Human Habitation) Act, if a property is deemed unfit the tenant has the right to bring a claim against its landlord for breach of contract. Tenants will be able to apply directly to the Court for an injunction to compel their landlord to undertake the needed works and for damages to be awarded. Damages are likely to be assessed in a similar manner to disrepair claims on a ‘loss of amenity’ basis.

Currently disrepair claims are brought in accordance with the well-established ‘pre-action protocol for disrepair claims’. It remains to be seen as to whether they will be amended to include ‘fitness claims’, but it is likely that it will be amended to continue to place emphasis on early resolution of claims thus limiting costs and the impact on limited court resources.

The Act applies to all social and private sector landlords or agents acting on their behalf. It is no coincidence that this Act follows the tragedy of Grenfell Tower and means that landlords will need to pay much closer attention to their obligations to their tenants. A first and urgent step should be to review repair policies.

Our experience shows that one area where landlords fall down is on repair record keeping. It is often the case that landlords’ record keeping falls short both, where repairs are completed or, following a tenant refusing to give access, have yet to start.

It is essential that repair history records and systems are up to date and record information accurately in a way, which is easy to understand. Ultimately, these records will be scrutinised by solicitors and the court so it is important they are accurate.

The Homes (Fitness for Human Habitation) Act cannot be ignored but nor should it unnecessarily worry registered providers. It should however serve as a reminder of good practice.