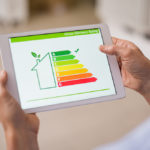 Building a sustainable future: decarbonising how we heat our homes

From increased funding for housing associations and local authorities, to taking steps towards meeting the Government’s target of building 300,000 new homes a year until 2020, the housing and construction industry is experiencing change. Martyn Bridges, Director of Technical Communication and Product Management at Worcester Bosch, questions where energy sits within these ambitious plans and the drive towards providing quality and low carbon housing.
Header Image: ©Rido/AdobeStock

Industry collaboration, creating healthy homes and the growing impact of industry 4.0 with connected devices were all key discussion points at the Housing Forum’s Energy Summit: Building a Sustainable Future. At the top of the agenda though was the decarbonisation of heat in the UK, with an increased drive towards zero carbon homes. With social housing taking a large proportion of the UK’s existing housing stock, social landlords are well placed to help cut carbon emissions in UK homes, but as of yet, it is not clear how they go about it.

A heated debate
Heat is likely to be the UK’s biggest challenge in the decarbonisation of heating and hot water in existing and new-build housing, given that it accounts for almost a third of UK emissions. What’s more, with boilers tending to have a 15-year product lifespan, they are likely to remain the norm until the mid-2030s. If the Government is serious about decarbonisation, boilers as we know them today in their present form should no longer be in existence from around 2035, and while this may seem a daunting prospect, the UK has already started to seek out alternative, carbon free gases.

What lies ahead?
In the future, bio-methane, electric or hydrogen powered heat appliances are all being considered, but each presents its own challenges. Bio-methane, for example, poses issues around sustainability, price and supply. The success of electrification will depend largely on the decreased reliance on fossil fuels to form electricity and a significant investment in infrastructure. What’s more, heat demand can vary considerably and electricity storage currently and perhaps in the future would be unlikely to satisfy demand.

Hydrogen, which does not generate carbon dioxide (CO2) or carbon monoxide (CO) when burned and flows in a similar way to methane, could allow the UK to use its already well-structured and heavily invested-in gas network. As such, hydrogen is set to be the biggest future fuel contender, but it is not entirely problem-free. There are many challenges associated with hydrogen’s inherent properties too which leads to additional considerations in the development of hydrogen-fuelled boilers. Flame detection and having a reliable ignition, for example, is difficult given that hydrogen is not visible. What’s more, condensate removal could present its own issues due to water being a well-known by-product of burning hydrogen.

Manufacturer management
It is well-known that many homeowners do not usually think too much about their heating system until it fails, which is where offering heat as a service could be a viable option in the decarbonising of heat in the UK. In this scenario, heating manufacturers take ownership of the production and maintenance of the physical asset/heating system and simply rent output/heat to end-users. As such, the onus could be more on manufacturers to decarbonise the UK’s heat network rather than on homeowners.

Health and wellbeing
Also discussed was the drive towards building and retrofitting healthy rather than sustainable homes whereby homes are designed and built with an empathetic point of view, taking into account the needs of the people who will be living in them. For example, thermal comfort and air quality are crucial factors, which affect the physical health, mental wellbeing and social relationships of occupants.

While the UK has made progress in improving the efficiency of its heating systems, particularly with the introduction of high efficiency boilers in 2005 and improved upon that further with the Boiler Plus legislation in 2018 as part of the Heat in Buildings policy, there is still a long way to go in terms of the heating technology itself. This is where innovation will be key with manufacturers working alongside buildings, end-users and the environment for the best results.

It is important to consider how new heating technologies will help to build a new generation of low carbon homes. While some of these technologies are great in theory, in order to build a sustainable future, collaboration between professionals across the housing and construction industry, as well as manufacturers, will be essential.

The Future of Fuel: What the future holds for the UK’s mains gas network, is available to download in full from the Worcester Bosch website at worcester-bosch.co.uk/hydrogen