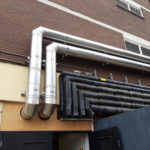 Refurbishing properties to the required standards with minimum disruption to residents can be challenging for housing associations. Ian Lock, Director of Sales – Newbuild & MO (Multi Occupancy) at Baxi Heating, discusses how using off-site prefabrication and one supplier enabled Charlton Triangle Homes to achieve all its project goals at Valiant House.

Charlton Triangle Homes (CTH), part of the Peabody Group, prides itself on providing affordable, high quality homes to thousands of people. Maintaining the properties to the required standards is the responsibility of Peabody’s Electrical and Mechanical Services division. So when, in 2019, the Charlton Board reported some deterioration in the performance of the building services at Valiant House, a 17-storey residential block containing 93 flats in Charlton, South East London, the team was called in immediately to carry out a rigorous survey. 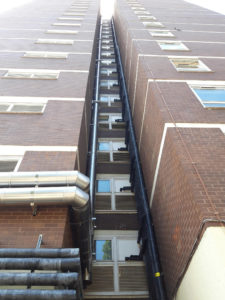 The findings were that, despite previous improvement work within the rooftop plant room, the non-condensing boilers at the heart of the central heating plant were beginning to show signs of inefficient and uneconomical operation. Additionally, the gas main had reached the end of its life span and needed replacing to comply with new regulations and HSE requirements. SGN, who supply the gas to Valiant House, were also preparing to replace their pipes through the building. An external consultant was therefore brought in to evaluate all the options and enable CTH and Peabody to arrive at an efficient, non-disruptive long-term solution for the residents.

The options
Ground source heat pumps (GSHP) — this low carbon option, while in line with CTH and Peabody’s wider environmental commitments for a reduced carbon footprint, had to be ruled out due to the location of Valiant House, just a few metres from Charlton Athletic Football Club’s Valley stadium.

“We were keen to explore the feasibility of applying low carbon technologies, but we couldn’t run the risk of freezing Charlton FC’s football pitch,” explained Ian Winterflood, Head of Electrical and Mechanical Services at Peabody.

Replacing the gas main and pipe risers to the building — another option that had to be rejected as it would have required removing concrete through floors to access the existing pipework, creating extra work to protect the building structure and increased costs to run a gas main up the side of the building.

Relocating the original rooftop plant room — the third option was to create a new centralised plant room, capable of meeting the demand of the building in a larger, unoccupied space at the rear of the building. This included installing high efficiency condensing boilers to supply new Heat Interface Units (HIU), indirect cylinders with electric back up and individual heat meters in each property. Replacing the cold-water tanks with new cost-effective sprinkler tanks and fire precaution upgrades were also part of this approach.

The Charlton Board found this to be the most robust option. Relocating the plant room to the ground floor removed the need to run extensive pipework up the building, thereby minimising works on the floors and avoiding disruption to the residents.

Prefab solutions
“Involving Baxi Heating from the outset paid dividends,” said Ian. “Consulting with them at the early stages meant that they were able to propose a tailor-made, prefabricated design that would achieve all of our project requirements and reduce the embodied carbon footprint of the refurbishment works.”

PPS also supplied a Baxi HIU unit, together with controls and a heat meter for each individual property, along with a new compact Megaflo ECO cylinder pre-assembled with the associated pipework and first fix rails.

“The major advantage for us was the time saved on site,” explained Ian. “The works began at the start of the year, so with COVID-19 restrictions in place just a few months later, we were running a little behind.

“However, thanks to the prefabricated solution provided, Milverdene were able to complete the changeover in just one day and refurbish five properties a day, putting us firmly back on schedule. We also didn’t have to worry about multiple deliveries or materials being left on site as the solutions arrived pre-assembled and ready for installation just when needed.”

Once the electrics, radiator sizing and valves had been checked and a new sprinkler pipe and sprinkler heads fitted, the project was completed and delivered on time and budget in June 2020.

“Charlton Board and the residents are delighted — the new plant room looks great and it all works brilliantly,” said Ian. “It’s a fantastic result and we are anticipating considerable energy and carbon savings from our new energy-efficient services.”

“Projecting forward, we will be investigating hydrogen boilers as a non-disruptive route to low carbon heating at Valiant House when the Remeha boilers reach the end of their life.”